You cannot place a new order from your country. United States

Bioitalia supports the Italian League for the Fight Against Cancer 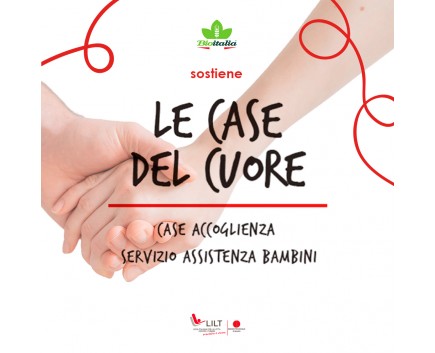 Bioitalia has produced foodstuffs since 1994, according to the Mediterranean diet tradition and using raw materials coming exclusively from organic farming.

According to the American Institute for Cancer Research (AICR), more than 30% of the cancers is linked to eating habits from both qualitative and quantitative point of view.

It means that a high percentage of cancer may be prevented just by following a correct diet plan and by a reasonable and targeted selection of food: several studies have confirmed the important role of the food in the development of certain cancer types as well as the properties of other foods useful to prevent their formation.

For Bioitalia, consumers health comes first, not just for the sake of talking.

By the way, Bioitalia has decided to commit with the Italian League for the Fight Against Cancer (LILT), supporting the project “the Houses of the Heath LILT”. The project makes available for needy families some apartments that are very close to the National Cancer Institute of Milan for children and teenagers under oncological treatment accompanied by a parent. The project aims to satisfy a primary need, create a private place and have the assistance of a social worker.

“We are very happy about this agreement, because it allows us to support an important matter such as the prevention, the assistance and the oncological research – says Giovanni Di Costanzo, the CEO of Bioitalia – not only for economic reasons, but also and especially because we can act together with LILT as spokespeople of a prevention system that must be an opportunity for everyone”.